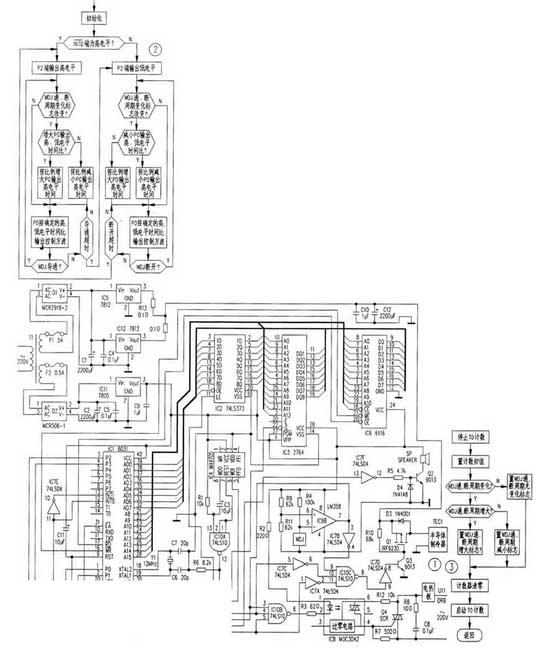 1. Automatic recognition circuit for raising and lowering temperature
When the temperature rise is required, the electrical contact mercury thermometer is in the off state (WDJ is not conducting). Operational amplifier LM358 (IC9B) has a high level⑤foot. Its⑥foot is 2.5V obtained by dividing the voltage between R9 and RI1.  The⑦foot outputs a high level to the⑫foot of single chip IC 1.When the need to cool down, according to the above analysis, the microcontroller IC ⑫ pin 1 is low. After the initialization of MCU, first read the data from foot ⑫. If foot⑫is input as "1", it indicates that the thermostat needs to be heated, otherwise it needs to be cooled. When the temperature rises, the single chip computer makes the output of the P2 port flat. When cooling down, the MCU makes the P2 port output low level.

2. Temperature control circuit
When the temperature needs to be raised, the 7th pin of IC9B outputs a high level, so that the 3 pin of the NAND gate IC10B (74LS10) is high. At the same time, the high level of the 7-pin output of IC9B passes through the non-gate IC7B to make the 9-pin of the NAND gate IC10C low, and the NAND gate IC10C is turned off, and the cooling circuit cannot work. When the MCU automatically recognizes that the oven needs to heat up, set the P2 terminal (output high level) and output a square wave with a duty ratio of 1:1 from the PO terminal. IC l OB 5 feet are high level, 4 feet are square wave, its 6-pin output and 5-pin inverted square wave, IC8 is energized, the two-way thyristor SCR is turned on, the hot plate starts to supply to the incubator heat. At this time, although the 9th pin of IC10C becomes a high level, the 11th pin is at a low level, so the NAND gate IC10C is kept off, and the temperature drop circuit still does not work.

After the heating plate stops heating, the temperature of the incubator begins to drop. After a period of time, the WDJ is disconnected, and the electric heating plate starts heating the temperature control device again. When heated to the set temperature, WDJ is turned on, and the 7th pin of IC9 outputs a low level, on the one hand, the heating plate stops heating; On the other hand, the INTO interrupt is triggered, so that the TO stops counting, after analyzing and judging the on and off periods of the WDJ and juxtaposing the corresponding flag bits. The TO starts counting again, and stores the on and off cycles of the current WDJ for comparison with the next on and off cycles. TO works in mode 2, when the low-order timing unit overflows, the TO interrupt will be triggered to complete the carry from the low-order timing unit to the high-order timing unit, that is, TO constitutes a spreadsheet timer. The main program performs calculation processing according to the flag bit, and increases or decreases the duty ratio of the square wave output square wave at a certain ratio in the basic period (WDJ once-on, off period), and outputs the temperature control pulse according to the time ratio. In this way, the number of conduction cycles of the triac SCR is changed within a certain period of time, and the power of the hot plate is controlled. The control algorithm is as follows:
If the current on/off period of the WDJ is less than the last time, the ratio of the high and low time of the PO output is reduced in the basic period. Otherwise, the PO output high and low time ratios are increased in the basic period, and finally the WDJ's on and off periods are the shortest. The PO end outputs the temperature control pulse according to the duty cycle pulse determined thereby, and the heat lost by the oven and the heat provided by the electric heating plate substantially reach a dynamic balance, so that the control precision reaches a high level. It can be seen that the hot plate is not only controlled by the WDJ, but also controlled by the PO output pulse. The WDJ controls whether the temperature control device is heated, and the pulse of the PO output controls the time ratio of the two-way thyristor on and off, thereby controlling the power of the hot plate.

3. Cooling control circuit
When the need to cool down, IC9B gate output pin 7 exhibits a low level. After the inversion of the non-gate IC7B, on the one hand, the 9-pin of the NAND gate IC10C (74LS10) is at a high level, on the one hand, the IC10B is turned off, and the temperature-increasing circuit does not operate. When the single-chip recognizes that the oven needs to be cooled, the P2 terminal is reset (output low level), and the P0 terminal outputs a square wave with a duty ratio of 1:1. The low level of the P2 output is inverted by IC7A and sent to the 11th pin of IC10C, so that the 8-pin output of IC10C is released. Transistor 9013, high-power FET Q1 continues to work with the wave, the semiconductor cooler works, and the oven begins to cool down.

4. Temperature abnormal alarm circuit
When the temperature control circuit is working normally, the on/off cycle of the electrical contact mercury thermometer is generally several tens of seconds. If the rise and fall control circuit fails, this cycle will inevitably be abnormal. The upper limit of the cycle is set according to the volume of the oven (set in the timing program). When the period exceeds the upper limit value, the P3 terminal of the single-chip microcomputer outputs a low level, and after the IC7F is inverted, the Q2 is satisfactorily turned on, and the self-contained micro-dc sounder SP is energized to generate an alarm sound.

Third, reliability design
The temperature controller uses semiconductor devices such as a thyristor and a field effect transistor for controlling the rising and lowering elements of the electric heating plate and the semiconductor refrigerator, thereby eliminating the disadvantage that the relay contact is liable to cause a temperature loss due to poor oxidation contact.

This application also uses the microprocessor monitoring circuit produced by MAX. When the program runs away, the WDI end will be "less than the pulse signal in 1.6s, and the WDO end will output a low level, so that the 10th pin of IC10A outputs a high level, and IC 1 is reset. Effectively prevent the program from running away and causing temperature to run out of control. In addition, software traps are added at appropriate locations in the unused population and in the white space of the program memory to prevent the program from running away.

Automatic correction of misjudgment of rising and cooling. When the MCU is in a warming state and has just reached the predetermined temperature and stops, if it is in the event of a power outage, it will suddenly call. The MCU will restart and misjudge the incubator should be in the cooling state. When the MCU is in the cooling state, there is a similar situation. The method of automatically correcting this misjudgment by the single-chip microcomputer is that after the reset of the single-chip microcomputer, the device for raising and lowering temperature is automatically controlled according to the detected rising and falling state. If the number of minutes (according to the volume of the box is set by software), the state of the internal contact mercury thermometer does not change, indicating that the discrimination is wrong, the microcontroller then changes the level of the P2 terminal, thereby changing the state of the rise and fall.
Share:
PREV：A Simple PWM Temperature Control Fan Circuit Design
NEXT：Simple and practical analog temperature control circuit principle